Posted at 05:11h in SPEC Expedition by Barney Swan 0 Comments 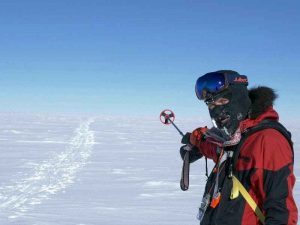 Can it be 50 days since we started? I think Barney’s feet would feel like to was 50 or more days…. Though now with his new boots he is making much better progress and he says the difference is amazing.

We saw the tracks of Robert and the Last Degree Team today. See the attached image. It was strange to know that we will meet up with them in the next day or so. More people, noise and stories. We are only 8 miles now behind them. It is unbelievable to think that on 11 January it will have been 32 years since Robert Swan first reached the Geographical South Pole on his Footsteps of Scott Antarctic Expedition. Now 32 years later he will arrive at the South Pole with his son Barney Swan, 23 years old and Roger Mear’s (who was on Footsteps of Scott with him) wife Ghazala as she skies with the SPEC Last Degree Team to the pole.

Back in 1984, Southern Quest, which was ship that Robert had purchased to get them to Antarctica, set sail on 3 November to travel the 14,842 nautical miles (27,487 km) to Antarctica. The expedition stopped over in Lyttelton, New Zealand to meet Bill Burton, who at 96 years old was the last surviving member of Robert Falcon Scott’s expedition in 1912. After that meeting, Robert’s Antarctic expedition was given the official name of “In the Footsteps of Scott”. Upon arrival on the frozen continent, Robert and the team spent the Antarctic winter at the ‘Jack Hayward’ base with colleagues John Tolson and Dr. Michael Stroud. When the winter had passed, Robert, Roger Mear and Gareth Wood set out to walk 900 miles (1,400 km) to the Geographical South Pole. They arrived at the South Pole on 11 January 1986, after 70 days without the aid of any radio communications or back-up support and having hauled 350 lbs. (160 kg) sledges. This 3 man team had achieved the longest unassisted march ever made in history. Once at the pole, they received the horrible news that their ship, Southern Quest, had been crushed by pack ice and had sunk in Antarctica, just minutes before they arrived at the South Pole. However, Robert returned to Antarctica in 1987 with a ship to collect the rest of the team and to remove all traces of his expedition.

I can’t comprehend how Robert must be feeling. So many years working for the preservation and protection of Antarctic. A continent so close to his heart and a place where he lost so many of his friends. I look forward to hearing more stories from Robert when we meet up….perhapstomorrow!