Posted at 03:48h in SPEC Expedition by Barney Swan 0 Comments 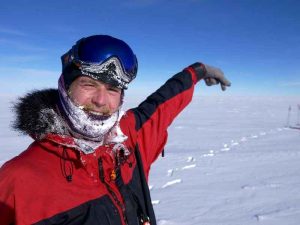 Hello, this is Tem writing the daily blog for the first time – and we are excitingly camped just 11 nautical miles from the Pole.

Today has been a series of 6 hour long pulls in our coldest day so far: -35° C. Throughout the day I’ve been trying to film as much as possible, but also keep my fingers from being exposed – they’ve already had a bit of frostnip from earlier in the week.

This morning I set up the drone with little success, it was just too windy. But my camera and batteries have been surviving well, and I feel very fortunate to be working in such an incredible landscape.

The day ended with a glimpse of the buildings at the South Pole on the distant horizon. Well probably lose sight of them as we ski tomorrow, going down into dips in the landscape, only to catch sight of them again when we gain some height. But each time they’ll be getting closer, as we close in on journey’s end.

Today we completed another 9.1 nautical miles today and find ourselves 12 nm from the pole. The plan is to do 6 each of the next two days.  Everyone did well today. The winds picked up and it was a very cold and tough pull for parts of the day – with the surface beginning to take on the sand-like appearance we have heard about. A couple team members have had altitude sickness signs today, which could be due to changes in weather that has caused the altitude to feel higher.

Everyone’s facemasks took a lot on today. Kyle went through three.  We got into camp and set up the tents for another dehydrated meal. We are all getting sick of them… but hard to imagine how hard it’s been for the SPEC group. Regardless, we all look forward to arriving at the Pole where we will be ready for a fully cooked dinner.

Speaking of the pole – the SPEC team was especially moved and excited to see the Building of the South Pole Station peeking out over the horizon. Big hugs all around.   Windy night. Wind-chill is likely to approach -40°C. But sunny, so the tents should be warm.   Happy Saturday all….

Let’s go back….105 years ago when Sir Robert Falcon Scott and his team were also headed to the South Pole. Here is an excerpt from their diaries….

“The support team who had left Sir Robert Falcon Scott, to continue to the South Pole had made it back to camp, but they too had a difficult return journey. On 13 January 1912, they reached the Shackleton falls where they had a choice. They could take a three-day detour to get to the bottom or they could rush the falls on their sledge. Lieutenant Evans who was the most senior man present, asked the others what they would like to do, their reply being that as he was the officer he should decide. The glacier was rushed, thus saving a three-day trek, and whilst they were battered and bruised no bones were broken. Exhausted on the return journey, Lieutenant Evans broke down with a severe attack of scurvy. On the 13 February 1912, he asked to be left behind but against his protests, the rest of the team bound him to a sledge in his sleeping bag and dragged him for over 100 miles. When they could go no further they made camp. Evans was to stay in the camp with Lashly remaining behind to look after him. His other companion Crean would make a desperate attempt to reach base; if he failed all three would perish. They were almost out of food and so Crean took only a few biscuits and a little chocolate with him. After a continuous eighteen-hour march Crean made it to Hut Point and raised the alarm. Evans and Lashly were rescued and sledged back to camp. 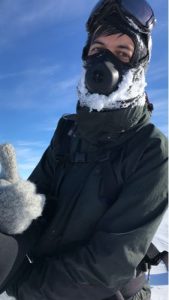 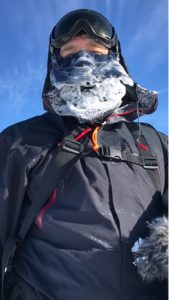 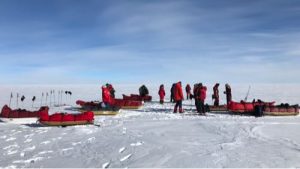