Posted at 04:57h in SPEC Expedition by Barney Swan 0 Comments 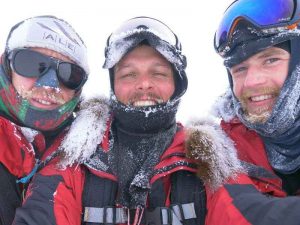 Many of the schools following us have asked for some Antarctic Trivia….here we go

There are 2 ATM’s in Antarctica – Believe it or not, if you need some quick cash at the McMurdo Station – the largest scientific research station on the continent – you’re in luck because Wells Fargo installed two ATMs there in 1998. McMurdo is essentially a small town, with coffee shops, a general store, a post office, etc. This closed micro-economy needs cold hard cash to function properly. Only one of the two machines is operable at any given time, and the trustworthy crew at McMurdo has been trained to repair the machines – swapping parts back and forth if need be.

There is only one insect in Antarctica – Insect lovers living in Antarctica only have one species to observe: Belgica antarctica. This wingless fly is also the continent’s largest terrestrial animal at just 2-6 millimeters long. It’s also quite a trooper: as a larva, it survives the total freezing of its bodily fluids.

Some parts of Antarctica have not seen snow or rain for almost 2 million years! – Talk about a dry spell: there are dry valleys in Antarctica that haven’t experienced precipitation for 2 million years! Sure, 98% of the continent is covered in ice, but this is the driest place on the planet after all. Antarctica is still intensely cold despite the low precipitation, with howling winds contributing to the overall discomfort.

Robert Swan is in the Guinness book of world records as the first person in history to walk to both the North and South Poles. He led a 3 man Expedition to the South Pole arriving on January 11 1986 and 3 years later led an eight man expedition arriving at the North Pole on May 14 1989. So cooool

Before you go...
Join the Circle!