Posted at 05:47h in SPEC Expedition by Rob Swan 0 Comments 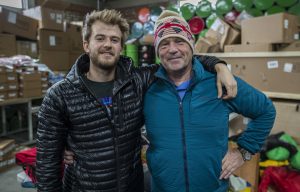 They had skied for 70 days and a total of 872.99nm. No one had heard anything from them since the day they left their small base on the Ross Ice Shelf…..but they made it.

When Robert departed Antarctica back in 1986 he wanted to protect and preserve this icy continent. “Let’s show that it can be the best of man and not the worst of man”. He was aware that he had a platform and could make a difference, people would listen….and so it began…

Today, 32 years later Robert Swan is back in Antarctica, though he has never truly left. If someone asked you what you had done or were planning to do for the next 32 years….what would you say? Robert would tell you “We are saving Antarctica”

He has been working with students and educators, presenting at many of the Fortune 500 companies around the globe, talking to World Leaders about how Antarctica might be relevant to their causes and missions and how to connect the dots on climate change, community outreach, renewable energy and education.

If you were fortunate enough to be in his path then you were swept up by his enthusiasm, inspiration and “never say no” attitude. Robert has truly changed so many lives, encouraged multinational organizations to change their philosophies on energy and leadership, emboldened woman in Asia and Africa to join his Leadership and Sustainability Expeditions to Antarctica and always been relevant to the issues communities around the world are facing.

For more than 5 years he has been planning this South Pole Energy Challenge Expedition. He would ski with a small team to the Geographic South Pole using only renewable energy. If he could show this was possible in the highest driest and windiest place on earth then it would be possible anywhere in the world. His only non-negotiable requirement….that his 23 year old son Barney join him and that on reaching the Pole he would “pass the baton” to Barney and the younger generation.

Now at 61 years of age, he said he couldn’t keep up. No aches, pain or equipment issues. He could ski 10nm each day but not the 12 -14nm needed to reach the South Pole and test all the technology before the Antarctic winter began. He made it clear HE was not the Expedition, he was just the catalyst to make it happen.

So Barney and the team proceeded without him. An incredible feat for a young man. Two days ago Robert met up with the SPEC Team again, as they near the South Pole. He WILL ski to the Pole with them. The distance isn’t relevant but the Expedition was a success and Father and Son will join hands and complete a journey started 23 years ago when Barney was born. Maybe Robert truly didn’t think he could ski 14nm/day, or……….. maybe he is not quite ready to “pass the baton”. Time will tell….let’s talk again in 32 years!!